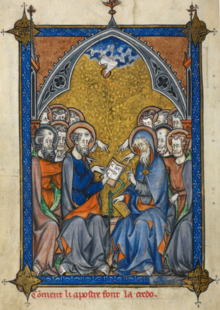 The Apostles' Creed may be considered to be an authentic expression of the apostolic faith in full harmony with the spirit and words of the New Testament. However like anything of value that has an uncertain beginning, but a valuable place in history, there is often legend and hyperbole surrounding its origins. The Apostles Creed is no different.  The most interesting but obviously incorrect legend is that as there are twelve statements and that each of the Apostles contributed some line based on their collective lives, teachings and experiences with Jesus.

The Apostles creed also known as Symbolum Apostolorum was developed sometime between the 2nd and 4th century.  It is by far the most popular of the Creeds in the western Churches.  It’s often referred to as the Creed of Creeds. The earliest written version of the creed is perhaps the Interrogatory Creed of Hippolytus (ca. A.D. 215). In Hippolytus' version, it was given in question and answer format with the baptismal candidates answering in the affirmative that they believed each statement. The current form is first found in the writings of Caesarius of Arles (ad 542).

The creed was apparently used as a summary of Christian doctrine for baptismal candidates in the churches of Rome, It also was used much later as a simple but valuable tool to share and express ones faith.  Imagine in the middle 1400’s being a peasant and probably not able to read and write, and even if you did, the cost of obtaining anything akin to a copy of the bible or any canonical scripture would have cost a lifetime of wages, until the printing press came along in 1439. Suddenly you could now possess a copy of the Apostles Creed which would have contained all the statements, which if you believed, would account to you, the beliefs unto salvation.  On a side note the invention of the printing press came along (divinely?) at exactly the right time for the reformation movement, thereby allowing Luther and others to promulgate the truth as they saw it in the scriptures alone.  Without the ability to provide the truth in written and storied drawings for the uneducated the reformation would have died or been delayed.

Its current Modern day title of the Apostles Creed, dates from the late fourth century, and it may indeed be based on a shorter form of the creed in use in Rome in the middle of the second century. In his writing on the creeds of Christendom volume one Philip Schaff writes:

I. Character and Value.—As the Lord's Prayer is the Prayer of prayers, the Decalogue the Law of laws, so the Apostles' Creed is the Creed of creeds. It contains all the fundamental articles of the Christian faith necessary to salvation, in the form of facts, in simple Scripture language, and in the most natural order—the order of revelation— from God and the creation down to the resurrection and life everlasting. It is Trinitarian, and divided into three chief articles, expressing faith—in God the Father, the Maker of heaven and earth, in his only Son, our Lord and Savior, and in the Holy Spirit (in Deum Patrem, in Jesum Christum, in Spiritum Sanctum); the chief stress being laid on the second article, the supernatural birth, death, and resurrection of Christ.

The creed is not a logical statement of abstract doctrines, but a profession of living facts and saving truths and doctrine and is immensely important. If you do not teach, learn, and hold on to sound, truthful, biblical doctrine then anyone can refute that which you say or believe and Community Chapel expresses, teaches, and ascribes to sound Biblical doctrine.

The Apostles Creed is not so much God’s word to us as our words to God. It is a liturgical poem, and an act of worship, and while each statement is not directly found as chapter and verse in the Bible, It is our statement of what we believe as Christians.

When studied closely and certainly deeper than is what is being offered here, one would come to a conclusion that opposition to its use would be a direct attack on, or represent a degree of unbelief of the New Testament as a whole.

Certainly we do not include the words one holy catholic church. To include it would imply something different than what the word and its use during the inception of the creed implied. etymologically it is the Greek word for universal and one would need to study the early Roman church to see how many of the symbols, beliefs, and practices morphed from Rome’s early acceptance of many signs symbols and rituals of the myriad of pagan beliefs that where in practice at that time. So to model themselves as “accepting”, they labeled themselves as “universal” (Catholic).

Interestingly the Epistles of James 1&2 Peter, 1John and Jude where called by the early church the “General”, “Universal”, or “Catholic” Epistles because of their addressees where not limited to a single locality. James for example is addressed “to the twelve tribes scattered abroad” a designation for believers everywhere and probably implied all Jewish Christians at this early date.

Augustine was an early church father and a seeker of the truth. Even though a writer and formulator of doctrine in the early Catholic church wrote “If you hold to the word Catholic church, implying that religious belief system… That would exclude all the rest of us.” Augustine did not add Holy Catholic church due to its virtue of outward form, or because he agreed with the tenants of faith and doctrine… but because of the holiness of those who comprise it.

If there is a stumbling block besides the one holy catholic and apostolic church, it’s the fifth statement that says He descended into hell. Community Chapel rightly teaches the translated word and supporting scripture as Hades (ᾍδης Greek) or Sheol (שאול Hebrew) which is the non-permanent place or temporary address of the disembodied souls of dead. The Jews believed in a compartmentalized area for the righteous and un-righteous as we are taught. The rule of first mention in Gen 37:35, “surely I will go down to Sheol in mourning for my son". Jacob understood he would at some point see Joseph again.

Sheol/hades was a realm with two divisions—a place of blessing and a place of judgment. The abodes of the saved and the lost are both generally called “hades” in the Bible. The abode of the saved is also called “Abraham’s bosom” in Luke 16:22 and “paradise” in Luke 23:43. Further explanation has the abodes of the saved and the lost as separated by a “great chasm” Luke 16:26. When Jesus died, He went to the blessed side of sheol and, from there, took the believers with Him to heaven Ephesians 4:8–10. The judgment side of sheol/hades has remained unchanged. All unbelieving dead go there awaiting their final judgment in the future. Did Jesus go to sheol/hades? Yes, according to Ephesians 4:8–10 and Acts 2:31… Did Jesus go to hell… NO!

The word "hell" (latin, infernus, infernum, inferi) as we know it today did not exist at the time of the early church. Indeed the early use of the word had only one “L” in its proper/accepted spelling. The 1611 KJV of the bible has this One “L” spelling. Its early usage meant or implied “hidden, or out of sight".

When Jesus spoke to the penitent thief Dysmas, He said “today you will be with me in paradise.” He made no mention of stopping off in hell for three days first. However the single most important part is Jesus’ complete and total redemptive work on the cross, which is recounted only in the Gospel of John…“It is finished”. The Greek word would be translated as tetelestai, an accounting term that means “paid in full". When Jesus uttered those words, He paid the price… the debt of our sin past present and future.

We speak of the Apostles Creed as not being chapter and verse statements found in the Bible but that each statement can be ascribed to a verse(s) in scripture. Below is a list of a single verse for each of the 12 statements that comprise the Apostle’s Creed. You might find other verses…